The Lebanese Italian Business Council “LEABITALIA” has recently elected its new Board of Directors, during the General Assembly meeting held on Wednesday 10 April 2019 at the Chamber of Commerce, Industry and Agriculture of Beirut and Mount Lebanon.

Elections took place in the presence of the His Excellency Mr. Massimo Marotti, Ambassador of Italy in Lebanon, and Mr. Emanuele D’Andrassi, First Secretary at the Embassy.

The following were elected: Mr. Albert Aoun as President, Mr. Abdul Wadoud Nsouli as Vice-President, Mr. Arthur Dekermendjian as Secretary General, Mr. Ali El Moussawi as Treasurer, and Messrs Raphael Debbane, Antoine Habib, Nicolas Boukather, Samer Hilal, Ziad Kamareddine, as Members of the Board, and Messrs Mohammad Abdulrazak Itani and Bassam Halabi, as advisors to the Board, and Mr. Mohammed Ali Kabbani as a substitute member. 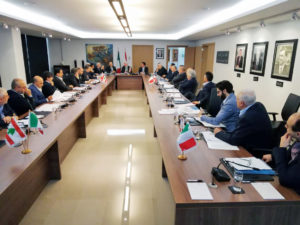 The Lebanese Italian Business Council (LEBITALIA) was established in July 2013, based on the agreement signed between the Chamber of Commerce, Industry and Agriculture in Beirut and Mount Lebanon with the Chamber of Commerce, Industry and Agriculture and Crafts of Milan. The Council’s objectives are mainly to strengthen trade partnerships between Lebanon and Italy, develop the exchange of goods and services between the two countries, and work towards establishing sustainable relations in economic, industrial and trade fields. Lebanese and Italian businessmen, traders and companies are members of the Council.

The halls are packed: This is interpack 2023